Admiration for the Vikings

The pirate word means "sea thief", but commonly it is used to talk about certain criminal activities. While pirate is reduced to an only word, there are several types of pirates, depending on the time and place the existed.

From all of these, the favourites of Oda-sensei are the Vikings. About 1000 years the ago the pirates who came from Scandinavia and assaulted the different countries were called Vikings. The origin of its name is in the word "Wik", that means "men of the north" or "men of the sea", that later it changed "to Vik".

The really were fearsome. They were so evil, that they entered from the coast and they devastated with the towns, destroying houses and ships, killing random people, robbing the food and all the value objects, and to make it worse, they burned all the buildings to ashes. Then they returned to their houses. They were so evil that all this is hard to believe.

They see all this as their work. When the men left to make their "work", everything what they brought back was for the benefit of the town. Warriors with "businesses" mentality. They showed proud of having fought for all their life. 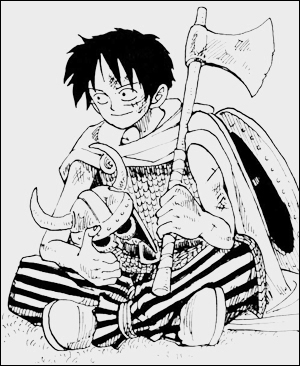 When Oda was not more that a boy he used to see this series in television, in Japan it was titled "Chisa na viking Vikke". Vicky was the son of the head of a Viking village, unlike the others he wasn't very strong but he was intelignt.

Acording to Oda this series is probably the reason why he likes pirates so much.