The Fleet Admiral is the highest rank within the Marine ranks. This rank is awarded to a single person, which falls under the command of all forces in the organization. Although the World Government stands on him, the Marine has certain range of autonomy in their decision making. Like the three Admirals, the Fleet Admiral has a Golden Den Den Mushi to request a Buster Call.

The Admiral rank is the second highest within the Marine ranks. This rank is awarded to only three people simultaneously, forming the "Greatest Military Power", center of one of the three great powers, the Marine Headquarters.

The three Admiral leave their real name to be known by a nickname formed by the combination of a color and an animal names. Their clothes will show at all moment the picked color.

As the Fleet Admiral, the three admirals have a Golden Den Den Mushi to request a Buster Call. In addition, they are forced to answer to the call of a Tenryuubito when they are required. 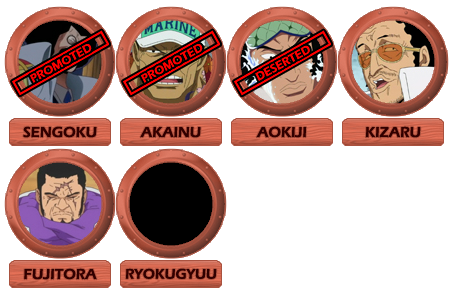 The Vice Admiral rank is the highest rank to which an officer may aspire before being promoted to a vacant Admiral. Within this range there are different tiers, a Vice Admiral can be at the same time under another Vice Admiral, after being selected as the superior of the base were the other is located.

The Vice Admiral had a warship to their command, sometimes also accompanied by other smaller ships. If a Vice Admiral is part of the Marine Headquarters, five of them can be requested with their vessels for a Buster Call, forming a destructive fleet up to ten warships.

All the Vice Admirals are able to control the "Ambition", in addition, many of them prove to be capable of using various "Rokushiki" techniques. 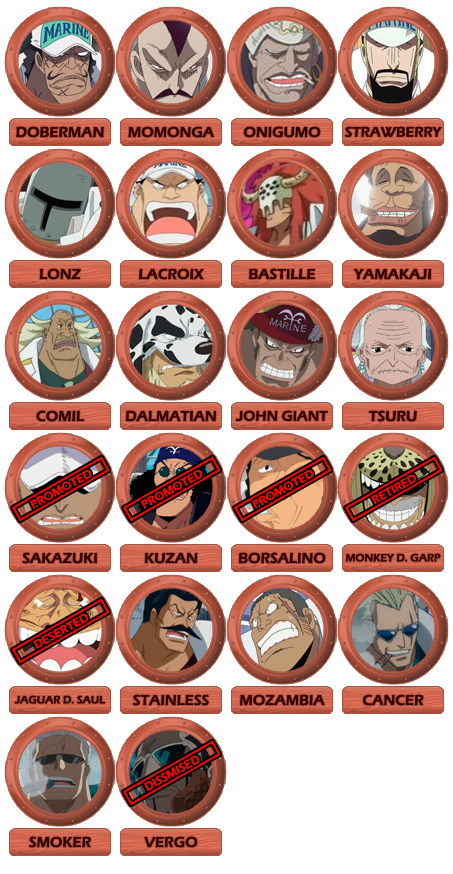 The Rear Admiral is the fourth echelon of the Marine. All of them have a warship under their command. 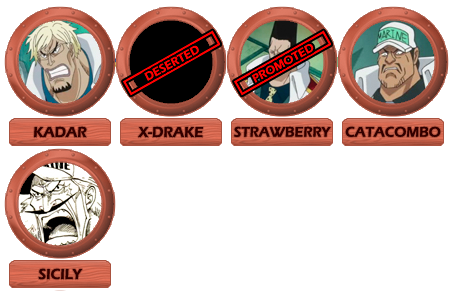 The Commodores are officials with some maneuverability. From this ranking, officers have some freedom to pursue their objectives leaving their usual position, as Smoker showed when he accepted his promotion to continue his Straw Hat crew's pursuit.

From this range, wearing suit under the official coat becomes more prevalent, completely leaving the use of the traditional sailor uniform. 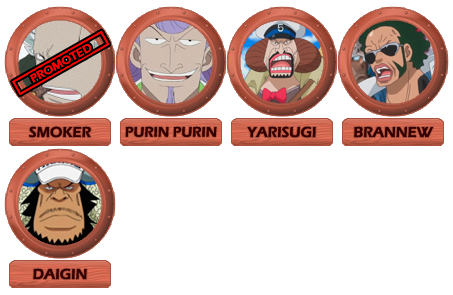 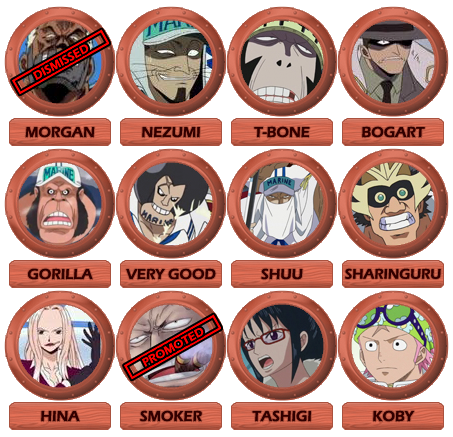 The Commander rank is the seventh echelon of the Marine. Most of the Commanders are under the command of other senior officers, although they may also be in command of small Marine bases. 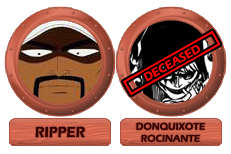 The Lieutenant Commander rank is the eighth echelon of the Marine. Sometimes, especially with Brannew, this rank is shown as a position focused on the logistics.

The Lieutenant rank is ninth echelon of the Marine. Officers under this range can command a ship of medium size, but they will always be under the orders of a superior officer.

From this rank, the officer has some freedom to dress as he likes and can stop using the typical sailor uniform and use a more formal dress.

The First Lieutenant rank is the tenth echelon of the Marine. These officers are under the orders of a superior officer, either in a base or a warship, they don 't have their own ship yet. 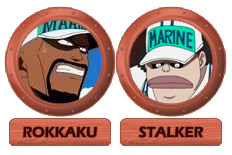 The Second Lieutenant rank is the eleventh echelon of the Marine. These officers are under the orders of a superior officer, either on a base or a warship.

From this rank, and as full right officers, they are allowed to wear the coat with the "Justice" inscription to their back, although its use is not indispensable. 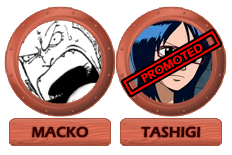 The highest rank a soldier can aspire before formally move to become a Marine officer. The Warrant Officer have a certain degree of control over other soldiers.

Senior soldiers mostly under the orders of an officer of medium or high rank that disposes a ship of their own, such as the Captains. 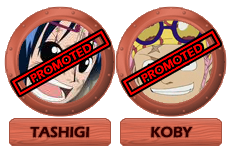 Soldiers mostly under the orders of an officer of medium or high rank that disposes a ship of their own, such as the Captains. 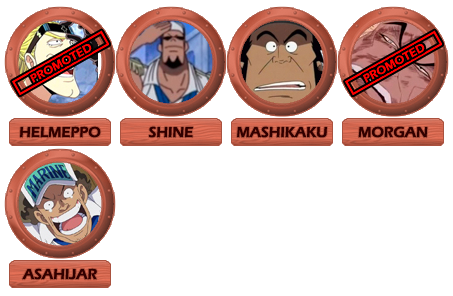 Lowest rank in the command hierarchy, they are only above the private, forming along them the main troop. To access this position a soldier must be fully integrated into the Marine structure.

Highest rank a private employee can aspire before becoming part of the command structure.

A private employee distinction rank over other common soldiers. Wearing the uniform is totally indispensable.

Privates under contract to the orders of the Marine. Wearing the "Marine" emblem in their clothes is totally indispensable.

Rank occupied by those who have not shown enough merits to join the Marine troops, as well as those stripped of their rank but without expulsion.

These are responsible for the various odd jobs, such as cleaning, laundry and kitchen. In turn, they undergo continuous training to overcome the entrance exams that allow them to enlist with full rights.

Since they are no direct part of the Marine troops, these apprentices simply wear the colors without wearing any kind of "Marine" distinction, in its place they show the "apprentice" word. 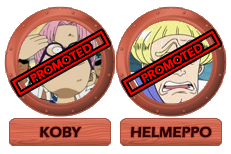 Special rank dedicated to investigating instances of maladministration, corruption or desertion within the Marine.

Rank destined to retired officers who have decided to focus on training and improving new recruits.