The history is located in Ohara, an island located in somewhere in West Blue. There lives a 8 years old girl, her name is Nico Robin, a girl who was left in charge of her uncles when her mother went in search of the Poneglyphs.

Robin was rejected by the other children, they hit and insulted her because she was a monster to their eyes, since she had the powers of the Hana Hana no Mi. In her home the panorama was not very different either, for her uncles she was not more that a charge, they only had eyes for their daughter while Robin was treated as a maid. 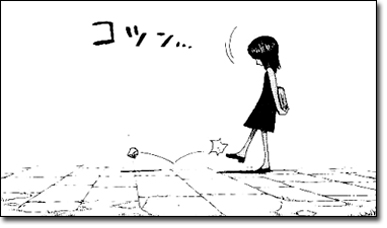 It could be said that Robin was a sad girl, but nevertheless, were people who worried about her, the Ohara archaeologists.

The study of the history

The Tree of the Knowledge is the greatest library of Ohara, it has the most valuable thing from the humanity, its history. This place serves as research laboratory for the Ohara archaeologists, those that had gained the title of scholars. Nico Robin is one of them, to her early age she has been able to surpass the exams and from Dr. Clover’s hands, the director of the library, she has obtained the medal that credits her as one of them. 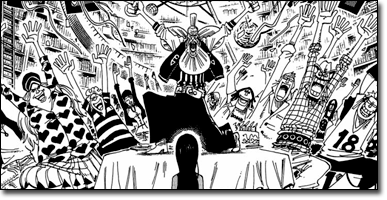 But these scholars didn’t expect that and intelligent little girl as Robin wants to study the Poneglyph, her true desire was to study the "blank in the history", the history that cannot be told. The study of the Poneglyph was prohibited, it is considered a crime and an attack against world peace, since it is said that those stone runes content the whereabouts of the Ancient Weapons.

Robin only wanted to know what happened in those 100 disappeared years of history, she even admitted to have spied to the rest of the scholars in their studies and to have seen them study a Poneglyph that they have hidden in the cellar of the library. The scholars did not want to let participate her in this investigation, because she is very young and because death sentence crime.

After the discussion in the Tree of Knowledge, after they denied her the study of the Poneglyph, Robin runs crying to the coast. Once there, Robin found in the coast a stranger shipwrecked, a giant called Jaguar D. Saul, which would become her friend. Saul would teach her an important lesson:

You laugh because you are happy, therefore to laugh makes you happy. Even when bad thins happens, you should laugh! Laugh when it hurts.

Laugh when it hurts, that's stupid…

Belive me, it isn't, dereshishishi

And with that peculiar laugh (Dereshi), Robin would learn to confront her pain. 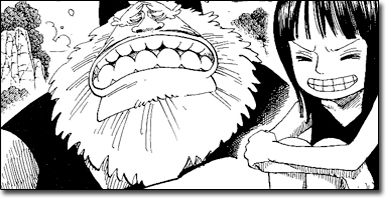 The days passed and Saul ended the raft with which he would leave Ohara. Them Robin told Saul about her dream, the one to study history and to meet with her mother who had left her to study the Poneglyphs. Then Saul noticed something important, Robin was the daughter of Olvia and the island where they are is Ohara, a place in which something terrible was going to happen. Saul warning Robin about the arrival of a fleet of the Marines with the intention to kill all the scholars of the island, she included, and also he told her that probably her mother would come to the island.

Meanwhile, at the Tree of Knowledge a strange woman arrives, her name is Nico Olvia, Robin’s mother. She has come to warn them of the arrival of the government, which had the intention to end whit their investigation. Them the warning of the arrival of a government ship arrives, it was the CP9, leaded by Spandine. The agents burst in into the library and surround the place to the search of the scholars, while Olvia runs to the coast to face gun in hand them. Olvia and Spandine meet and Olvia is reduced by the CP9. While this happens Robin already has arrived at the Tree of the Knowledge, but Clover decides to not tell her anything about the arrival of her mother.

Once the island is seizure, the government reunites Olvia with the rest of the scholars in the same place, in front of the Tree of the Knowledge. But Clover requests a last will, if they are going to die, he would like to show the Gorousei first the result of their study.

According to the study made by Clover and the rest of the scholars of Ohara, the Poneglyphs were created by an old civilization that burdened their message in unbreakable stone runes which they scattered everywhere. According to this theory they did it because they had an enemy and they did it this way so that enemy did not destroy this message. Peculiarly with the end of "the blank in history" the World Government was formed, therefore if the enemy of that people was the present World Government, those 100 lost years in history relate something that the World Government wants to hide. According to what the Poneglyphs relates, there was a gigantic nation, a kingdom, very powerful which it was eliminated by the union of several nations, those that later would happen to be called "World Government". This government more to want to prevent the resurrection of the weapons it wants to eliminate the ideals that this nation represented, that it is what they fear more. Just after explaining all this Clover was going to reveal the name of that nation, when the Gorusei ordered his elimination along with the rest of scholars, before he could conclude.

Kill him. Ohara knows too much. Give the order to attack… Don't let a single person escape alive.

Ordered by the Gorusei, Spandine used the Buster Call against Ohara, what Saul feared more become reality, the ships of the Marines that where waiting them begin the attack. The bombing of the island had begun, moment at which Robin finally realizes that the strange woman that the CP9 captured was her mother, Olvia. Robin them shout telling her progress, she finally has become an archaeologist, now they could be together... but Olvia could not admit that she was her mother, that would suppose the death of both.

The bombing already was on great scale, even for the surprise of the government mens this arriving at all parts of the island. Everyone would evacuate the island with the exception of the scholars, who would die in the bombing. Only Robin and Olvia remained between the flames, the scholars tried to save as many books as they could and the government agents tried to save their ass, this was when mother and daughter could finally reunite.

Saul would interrupt in this emotional moment to save Robin, Saul was a Vice Admiral of the Marines, the same one that captured Olvia but then desert with her because he refuses to participate in the Buster Call. Saul protected Robin as he could, face the fleet of the Buster Call, even Vice Admiral Kuzan, who later will be known as Admiral Aokiji. While Saul and Kuzan fight, they contemplate overwhelmed how Vice Admiral Sakazuki, the future Admiral Akainu, ordered to shoot against the evacuation ship in which Robin tried to escape.

We have to be thorough…!!! If even one of those scholars made it onto that ship, all of the sacrifices we've made would be for nothin…!! We must eliminate the very possibility of this EVIL existing!!!

Then Saul lost control, incapable to believe what kind of justice his mates where using. But it was useless, Saul was defeated and frozen by Kuzan, although his last words will always be graven in Robin's head:

Nobody's born into this world completly alone!!! Dereshishishi… They're waiting for you, somewhere out there!! Go and find your nakamas, Robin!!!!

Meanwhile the end of an ancestry of scholars also arrived at his end... Clover, Olvia and the others archaeologists, they fought to save books while the structure collapsed.

This is the history… humanity has chosen. We, thoughtless humans…!!!

One last surprise for Robin, Kuzan was arranged to let her escape, with the promise of which he would continue watching for her and if someday she became a serious threat he would be the firs one in coming to capture her.

Robin left an Ohara covered by the flames on the boat aported by Kuzan and following an ice way path by him. No matter how much she attempted to repress her pain laughing with the peculiar laugh of Saul, Dereshi, she wasn’t able to avoid cry...

From here on, 79.000.000 Berries by would be offered for her head, with the excuse of accusing her of the sink of the ships destroyed by Saul, she was persecuted by the rest of her life.