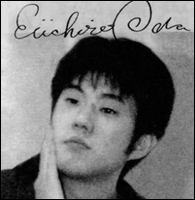 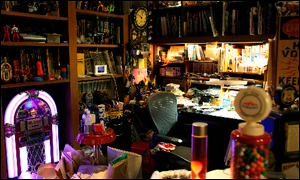 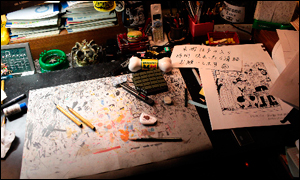 In various ocasions Oda has show his bizarre studio to his fans. Distinguished by its disorder, his work table is always filled with a lot of papers and drawing materials scattered everywhere. In his shelves he always have history books of various topics that he certainly uses as reference material for his stories, same as he has figures and antiques of all kinds. He has also said to always have nearly hundreds of both American and European music CD's, stacked Shounen Jump magazines and letters from his fans, which he reads and responds personally.