The history told that Montblanc Noland was a liar that told histories about a City of Gold filled with treasures, there are people who said that he believed his own lies. He gets to lie his own king and for that reason he was executed. But was he really a liar or maybe he told the truth... let's know his true history.

Saved by the bell

Karugara was the greatest soldier than has had Shandora. Karugara became famous 400 years ago after massacring all the boats that arrived at the island of Jaya. Then history changes to a ship at the command of: Montblanc Noland. This crew took to 2 years sailing the Grand Line, and after storms and hurricanes the crew is remainder, many of the members are close to dead, the ship sails lost in the high sea and lack of food.

But Noland heard the sound of a bell and guided his team to an island, the Jaya Island. Noland once disembarked, discovered that the entire island was infested by an epidemic called "the fever of the forest". The town was plagued of corpses and a girl called Musse was going to be given in sacrifice to the God Kashigami, with hope to calm him and save the village. But as soon as the moment of the sacrifice arrived Noland arrives, he stops and kills Kashigami who turns out to be a giant snake.

A battle between Noland and Karugara begins, and this last one fought seriously with the intention to kill him, in name of his God, but Noland decides to do a promise to the village, if in the term of 2 days the population of the village is not cured, he will be give in sacrifice to all his crew. Therefore her crew was jailed and Noland enters in Jaya's forest, in order to find a plant called Kona, that the entire village adores.

In the village, the situation was critical, all had the intention of Karugara to kill Noland, but the head of the village is the only one who has confidence in Noland. In the next morning in Jaya, there was a tremendous earthquake, and all thought it was caused by the revenge of God after the death of the Kashigami snake.

Therefore Karugara enters in the forest with the intention to find Noland and kill him, hoping to calm his God. But Karugara, finds Noland close to his dead. Karugara wished to kill him, because he thinks that the wounds of Noland are caused by God. But Noland begins to speak him about his God, that it doesn't exist and that the sacrifices of people are useless, them Karugara hits him for insulting his ideals.

But Noland continued speaking, saying that to make the sacrifices is inhuman, and he tried to convince Karugara, the sacrifice is not the right way to venerate God. Karugara strikes him again and said that Musse is his daughter, and that everything is by the sake of the village although if he must kill his own daughter. In those moments in the village, the arrived hour has come, and it is the moment to kill the Noland's crew, because their captain still hasn't return.

Noland begins to shout, for 60 years this epidemic has also affected to his country, the fever of the forest spread and 90% of the population died, but thanks to the scientific research and the plant of Kona, less of 3% of the people who is infect with the virus dies today. Noland attacks Karugara saying him that with his fanaticism he is stepping on years of progress, where of the people risked their own life.

From the forest the son of Kashigami appeared, and attempt to kill Noland, but Karugara, betraying his ideas interposes him and killed him. Karugara therefore begins to trust Noland and aid to save to his town with that "science". 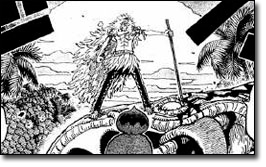 The gratitude of a village

After 10 days, Noland and Karugara already are great friends. Karugara decides to show him the instrument of the village, the golden bell located in Shandora. Shandora is known as the City of Gold because all is made with gold. Karugara says to Noland that his crew can take all gold that wishes, because now they are in debt with them.

All the gold excepting the bell, and the Poneglyph, because their ancestors died protecting those writings, and they continued protecting those treasures. But the relation of the inhabitants of Jaya and the crew of Noland, changes radically, from great hospitality to the indifference, now in fact the inhabitants of the island wish that they leave as soon as possible. 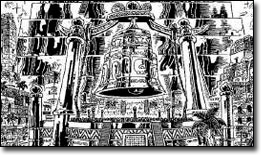 The reason was the study of the plants that made Noland, he cut the plants of the forest, that for Shandian people were sacred because they think that the souls of their ancestors resided in them. The bell did not sound during days. The following morning the moment to leave arrives, and Noland orders his men to leave in the island all the gold they get, because what they had done was unforgivable.

But the aboard doctor explained to Musse, why they had done it: the fever of the forest is a very contagious disease, which can be passed through the plants to the men and vice versa. All the plants that Noland had cut where cut because they are the cause of the epidemic.

Musse ran towards the village and tries to convince Karugara father not to let escape to his best friend than he never has had. The ship already has left, but suddenly the shout of Karugara can be heard, he shouts that he had committed his greater error. Since then the golden bell would sound daily in Noland honour so that he can feel the gratefulness of the inhabitants of Shandia wherever he is.

5 years later Noland returned to sail the Grand Line but this time not with his men but with the king of his country. He wanted to show him the City of Gold that he had discovered. But when they arrived they didn't find anything, half of the island had disappeared (it was sent to Skypiea, to Upper Yard), so Noland was marked as liar and for the time that he made waste to his king he was condemned to die executed.