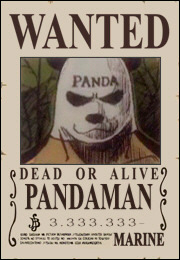 Q: Who or what is Pandaman?

A: Pandaman is an hidden character who frequently appears within the One Piece manga/anime, and while it would not be true to call him one of the best kept secrets of OP, as SBS readers will notice Oda occasionally fields questions about him, you may be surprised at just how many times he appears! Pandaman was originally a wrestling character that Oda submitted to Jump as a potential Kinnikuman enemy character in a contest, years ago. He first showed up in Volume 5 onboard the Baratie, and he has appeared in the background of a myriad of crowd scenes since.

Q: How can I identify Pandaman?

A: Because Pandaman is often so far in the background that he is little more than a blob resembling a stick figure, it can be extremely tricky to spot him. He wears a panda mask, with signature small, black, circular ears on top of its head and a blank, unexpressive face, no shirt, and black pants. His favorite static pose is arms crossed with feet spread apart. Pandaman also likes to appear in scenes of panic. He can often be seen running away in the midst of a crowd of shrieking people.

Q: Why is Pandaman on the run all the time?

A: The reason why Pandaman is frequently found on the run is because he IS on the run! From who? Tomato Gang, that's who. Who is Tomato Gang? Very recently publicly revealed by Oda in Volume 27, Tomato Gang is a debt collector who is out to collect some of Pandaman's outstanding dues. He has a rotund, tomato-shaped head with a tuft of hair sticking out the top, and a twirly mustache. He holds a gun-like object which is rumored to be a seaweed roll. Tomato Gang is sometimes spotted in the same scene as Pandaman.