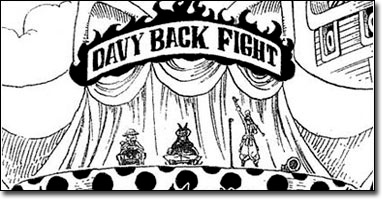 The Davy Back Fight is a pirate game created many years ago in Kaizoku Island, the supposed paradise of the pirates, located somewhere in the Grand Line. The game consists in getting a better crew, obtaining from the rivals new members for you own crew. The winner can choose to anyone of the members of the opposite team, the chosen one must offer loyalty to his new captain. If there isn't any interesting member left it is possible to decided to get the "Jolly Roger " (flag) of the opponents. The crew who loses their flag will have to surpass the shame of the defeat and sail without flag during the rest of their existence. The decision to participate in the game can only be taken by the captains, when the captains agree, both shoot a weapon and the one that makes the higher shot will decide the rules of the game.

Conditions of the defeat

Origins of the name

The name of the game comes from Davy Jones, an old pirate who was punished by the devil, according to the legend seems that his ship was sunk with all his treasures hidden in a teasure box and still it is at the depths of the sea. Everything that sinks in the sea belongs to Davy and therefore cannot be recovered, from there come the "Davy Back".

Orthodox rules, the game of the three coins 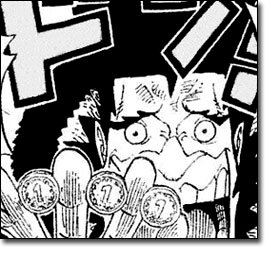 Both groups will have to give a lap around the island in a boat constructed by the same group, for the construction of the boat they have three wood barrels, the group that concludes first the lap wins. In this game participates three people per team. The Straw Hat chose Nami, Nico Robin and Usopp. Foxy's crew chose Porche, Kapoty (a Gyojin, swordfish) and Monda (the star shark).

It is a game similar to soccer, the field is divided in two halves to each side is a floater where the ball is due to introduce. The difference is that the ball is on the head of one of the participant and therefore will have to drag him to score a goal. They are allowed all type of blows with the exception of the use of arms. In this game participates three people per team. The Straw Hat chose Zoro, Sanji (ball) and Chopper (that could not participate by to be gained by Foxy's crew in the previous game). Foxy's crew chose Hamburg, Pickles and Big Pan (a wotan and the ball of the team). It is a one goal game. 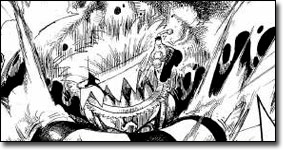 A one to one fight between the captains of both crews. Before beginning, a cannon is turned on its axis and shot. A radius of 50 meters from the zone of the impact will be the place where the combat will developed, in this case the bullet impact the Foxy's ship. The participants can use any thing that they find in the battle zone as weapon. No one is allowed to enter in the battle zone. The victory is obtained killing the opposite captain, leaving him KO or throwing him out of the game zone. 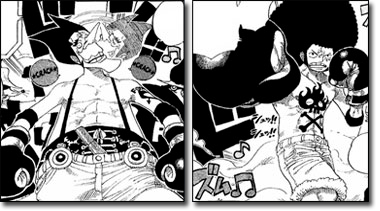