Dispersed by the world they exist some ancient stone runes, written in an extinct language, that contain data of the history that have been lost with the passage of time, these runes are called Poneglyphs. The content of those writings reveals the history of each country, the dark history of the world and even great secrets, like the location of the Ancient Weapons.

Nico Robin and the true history

Nico Robin is the only person in the world able to decode the ancestral language in which is written the Poneglyphs. Robin comes from an family of archaeologists and it is the last one of its descendants. The objective of Nico Robin is to find true history, the history "that cannot be told", hidden by some reason to the passage of time. For it she has to follow the Rio Poneglyph, "Rio" from the Spanish word (river) in representation to the way from rune to rune (as the current of a river), since it is said that each Poneglyph told the way to the following one, thus until you reach the one that contains the "true history". The reasons for Robin's search unknown. 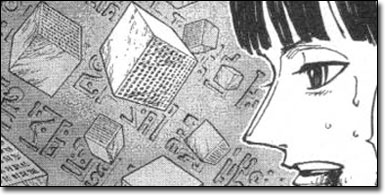 In the Real Crypt, under the palace of Arabasta, was the Poneglyph that told the location of Pluton, the ancestral weapon. Robin arrived to this rune with the help from Crocodile, when she was a member of the Baroque Works. Robin, said him that in the Poneglyph only was written up the history of the real family of Arabasta, but she was lying and keeping the data from Pluton. To date, she hasn’t revealed yet what was really written in that Poneglyph. 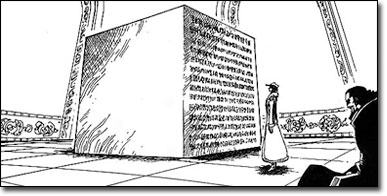 With the defeat of Enel, the people of Shandia rescue the Gold Bell. This bell and the writings of its base were the treasure of the ancestors of the town of Shandia, they died protecting them. Robin decipher its content, from all the writing she reveal the following:

We are the recorders of history. Existing in harmony whit the sound of the great bell.

The Ancient Weapon with the power so strong that is was named after a God… Poseidon. 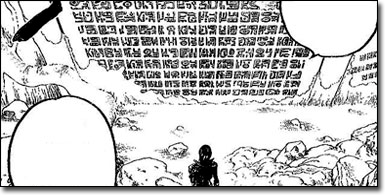 And the most surprising, next to that Poneglyph there was a hand added writing in the same language:

I have come here, I will guide this text to the ends.
— Gol D. Roger

Guided by the text from the Poneglyph found at Sky Island, Robin found a new one in the Sea Forest of Gyojin Island. But for her surprise there was something that made this one special, it wasn't a conventional text, it was an apology letter addressed to someone, a letter from someone called "Joy Boy"… 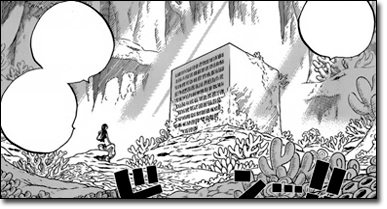 The answers to her questions would not be long in coming, after celebrating the defeat of the New Gyojin Pirates the King Neptune would reveal her the details of that apology letter. Joy Boy was someone who lived in the surface during the "one hundred years of blank". Those words were addressed to the Ningyo Princess living on the island at that time. Apparently it's an apology for breaking his promise wwith Gyojin Island. The legend on the royal family says that they need to maintain the promise of taking care of the ark Noah until the day his mission is revealed.

From where Robin drew her own conclusions. That day Noah, partially destroyed, was taken to the Sea Forest with the help of the Sea King. So, if Joy Boy wanted to use Noah he may possess the ability to control the Sea Kings. However, Neptune will clarified that it was the Ningyo Princess who possessed this ability and not Joy Boy.

Then, Robin came to a final conclusion:

Two years ago… I read a "Poneglyph" on "Sky Island" that pointed to the whereabouts of one of the Ancient Weapons. It may be safely said it pointed here. The Ningyo Princess who lived in the same time as Joy Boy, you might call her the same way. In other words, the Princess Shirahoshi has the same ability… Which means he has inherited the same name. His other name… is… the "Ancient Weapon": "Poseidon". 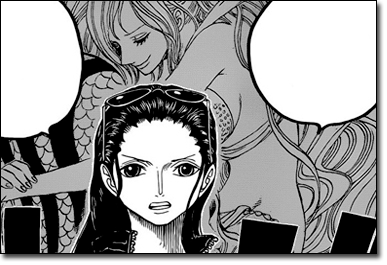