This machine was devised by Tom, the legendary carpenter. For him it was the hope that would save Water Seven opening new commercial routes. There were many disadvantages for the construction, like the Aqua Laguna or marine monsters. But Tom had already thought the solution to these problems, in fact the railroads would be constructed under the surface of the sea so that they were not damaged with the enormous force of the waves that causes the Aqua Laguna. For the marine monsters, Tom created some devices that repelled all the beings which inhabit the sea. The Umi Ressha works through a steam motor, the locomotive travels over the water it only uses the rails as a guide, as if they were a rope that indicates the way to follow.

Tom is a Gyojin (fishman) and he is also one of the best carpenters of the world, it is more, he is the legendary carpenter. He was the mentor of Iceberg and Franky, both have learned everything what they know from him. Tom was the one who design the ship of the pirate king Gol D. Roger, the "Oro Jackson".

That ship was the cause of why the world government ordered the capture of Tom, but Tom convinced the judge so that it postponed the judgment by 10 years to carry out the construction of the Umi Ressha. He would unite by a railway network the islands of Water Seven, San Ferudo, Putchi, Saint Popura and Enies Lobby.

Tom, Cutty Flam and Iceberg began the construction of the train, while the city sank in the absolute decadence by the decay of the commerce and the collapse of the island. After lot of work those 10 years passed and Tom manage to finalize his invention, now the Umi Ressha would take to the problems of these people far from the island furrowing the seas. Economic activity prospered thanks to the connection with: San Ferudo, Putchi and Saint Popura.

Before the celebration of the new judgment of Tom, he received the visit some agents of the government, the CP5 to the orders of Spandam. The objective of this group was the blueprints of Pluton, the ancestral weapon. Tom refused to respond causing the wrath of Spandam. The day of the judgment, Spandam uses the battle ships created by Cutty Flam (the Battle Franky) and used them to attack the judicial ship. Tom and his apprentices were blamed by these acts, but Tom made a deal with the judge again, to pardon this crime by the construction of the Umi Ressha and he would accept to be processed by the construction of Roger's ship.

With pride I will be executed by the power that I lend to that man called Roger, with a DON!

The end of Cutty Flam

Tom was going to be sent to Enies Lobby and executed by that crime, Cutty Flam one of his apprentices, was not arranged to allow this. He felt the culprit, his ships were the cause of this situation, he would never again create ships able to damage those which surround him. He interposed in the way of the train in which they escorted to Tom and shout:

Where do you think you are taking to your creator, Puffing Tom!?

In a desperate attempt to stop it he tried to stop the train with his own hands but it was useless he was raid over while Spandam laughter with a malevolent smile. 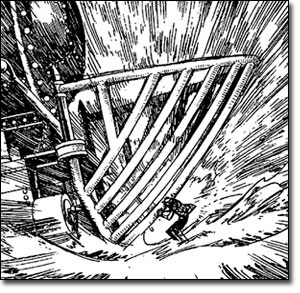 Tom-san, my goal is still you. I want you to come back and teach me some more. Someday, I want to create a dream ship… a dream ship that will proudly ride over the unknown waves at the end of the world…

Since them Cutty Flam would never again exist, with his knowledge he was able to reconstruct his own body and to turn it into a cyborg, here Franky was born.

Rocket Man was the prototype of Puffing Tom, the first and only Umi Ressha. Its construction was interrupted because it was unstable, once put in operation Rocket Man. The fron with a shark form is a wink to the ferocity of this machine.