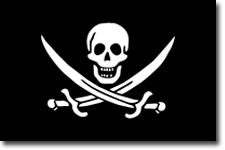 Jack Rackham (????- 1720), also known as Calico Jack or Jack el Calicó, he was a pirate captain during the XVIII century. The nickname was for the colourful clothes that Calico wear, but he was more famous for taking on board to two of the most famous pirate women: Anne Bonny and Mary Read. Rackman was the foreman of an English military ship called "The Neptune" under the command of the Captain Charles Vane. When Vane refused to persecute a French vessel in battle, the crew became angry in such a way that she rebelled and she rose to Rackham like his leader. Rackham turns the ship, persecuted to the French boat and defeated it. After this victory and stimulated by the wealth on board of the captured ship, Rackham suggested the crew to enter itself in the piracy. Perhaps partly due to the phantom of the riot that hung already on its heads, the crew agreed easily. Later, Rackham decided to accept a supply of real pardon and sailed towards the port of New Providence. During its stay there, Rackham fell in love with a married woman call Anne Bonny. Rackhan, turned in love with Anne Bonny, invested much of its looting in her. Later, he was united to the crew of Captain Burgess, old pirate also and at the moment corsair in the Caribbean in search of Spanish ships.

When the relation between Rackham and Bonny became public, the governor of New Providence threatened to them whipping to Anne by adultery. Before letting to be punished Bonny, the pair agreed upon taking control of a crew and robbing a ship. Fearing which the crew refused to share the trip with a woman, Anne dressed as a man and adopted the name of Adam Bonny, becoming a respected member of the crew and fighting next to its masculine companions in many skirmishes. After several boats armed from the Bahamas were sent to capture to them, Rackham and some of their crew were forced to escape. Next they were captured by a Spanish ship, but they were able to escape sailing around Jamaica, taking the control from several freighters of fishing and a brig. The governor decided to capture Rackham and sent in his search to the hunter of pirates Barnet Captain, who followed to them and he captured to them. Rackham and its crew were taken in opinion in Saint Jago De La Vega in Jamaica, the 16 of November of 1720. Along with the remaining crew members, were found guilty of piracy and hung on the following day.

Unfortunate the one who finds my innumerable treasures, since there will no be any ship that can load them all.

Rackham pronounced before dying, the king of all those that did not feel the laws, their laws were governed by a black flag.

Other pirates that inspired Oda 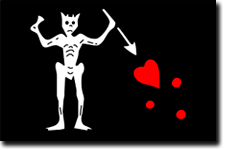 Edward Teach (Blackbeard) Nowadays there is no trustworthy data about his life, although there is much information about his acts, but always surrounded by myths. We know that he was natural of Bristol (England). Edward Teach was called and assumed the nickname of Blackbeard by its great amount of hair that covered its face. More anecdotal data than characterized it are for example that stop the hands-to-hand combat used a curved sword, cuts and sharp. Their red and wild eyes were consequence of their favourite drink, a mixture between alcohol and powder. The clothes and hands of Blackbeard were covered with greasy blood and, since it never tried to wash them to it. He was a gigantic man for that time, average 1'92 meters and weighed around 125 kilograms. His real name was "Thatch" but he chosen the name "Teach" because he is the one that Daniel Defoe included in the second edition of the General History of the Pirates. He died the 22 of November of 1718 at hands of Robert Maynard. This one commanded to cut the head to him and to hang it in the end of the Bowsprit of its boat.

Henry Morgan was born in Llanrhymni, Wales, around 1635, member of a reconciled affluent family. They kidnapped it when he was a boy, and was sent to the English colony of Barbados, in where their detectors sold it like slave. In 1654 Lord Cromwell, it sent an enormous fleet to invade the Indians of the west with the purpose of capturing the Spanish territories. The fleet I anchor in Barbados, in where they recruited one hundred of men, among them to Henry Morgan. They were defeated in a beginning by the Spaniards, but later they managed to take control of Jamaica. For 1666 already it had its own ship and one became a defender of Port Royal, Jamaica.

Bartholomew was an English buccaneer who intercepted the Spanish boats in the Caribbean. He was companion of Henry Morgan in I carry Beautiful in 1679.

François L'Ollonois (Jean-David Nau) was of Sabers d'Ollone, France, we known him as one of the cruellest pirates than sailed Spanish waters. It is said that once, he cuts 70 Spaniards heads with its sword, and he sent the heads to the governor of "Nombre de Diós". Also it is said that while he was in Panama, he sliced the chest of a woman, take her heart out and he ate it while she was still life. In 1667, he attached a Spanish ship, which was abandoning Porto Bello, loaded with the soldiers returning home. In the battle, most of the pirates were killed or wounded. L'Ollonois also was hurt in the battle but he could escape with some of his men. The Spanish captain captured L'Ollonois ship and sail course Porto Bello. L'Ollonois and to the few survivors arrived at coasts of Darien, and were captured by Indians, as they saw that they were disarmed, the Indians killed all the pirates and since they despised L'Ollonois by his acts, they cut him in pieces, they roasted him and finally they ate him.

Samuel Bellamy (Sam Black) is an original English pirate of the Devonshire, county of the south of England. At the beginning of year 1716 he bought a small sailboat, and he sailed until Cabo Cod in North America (Massachusetts), his idea was to try to recover the treasures of the sunken ships.