The legend of Davy Jones

Davy Back Fight is a totally fictitious pirata game, but the pirate whom makes honor to it and the "Davy Jones Locker" that Robin mentions in Volume 33 is a well-known legend among sailors in real life. There are several different accounts, but in general there was a lying, no-good pirate named Davy Jones, a greedy deck chief who was famous for putting all the crew's valuables in his own locker. He was so wicked, even for a pirate, that one day the Devil himself cursed Davy to live at the bottom of the sea forever, swabbing the deck of a sunken ship and placing all the sunken treasure into his locker, where it would never be seen again. So when pirates say "Put it in Davy Jones' locker!!" it means "Sink it to the bottom of the sea!!". 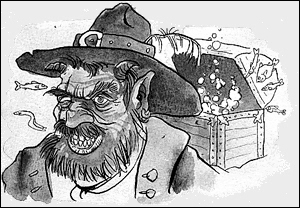