Skypiea and the different religions

The main subject of the Skypiea arc is the religion. As we can see the evident dilemma of the existence of a superior being, the adoration of the Earth or the confrontation between the faith and science as we could see in the past of Noland. But the religious theme doesn't end there, as we will be able to see throughout this article it's presence is more significant then we thought. 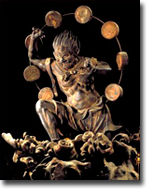 Enel takes the rol of God in this history, an omnipotent, powerful character, apparently invincible, that can hear everything, the creator and destructor...

His appearance is inspired in Raijin, the Buddhist God of the lighting. A character who as Enel lives in clouds, he control the lightings and has a ring with drums at his back with which he causes the sound of the thunders.

Enel's name also comes from a God, but this time of a God original from a novel. In the novel Finnegan's Wake of the Irish author James Joyce appeared a God called Enel-Rah. Many times his name has been romanized of different wais (Ener, Eneru...) that are A reference to the electricity, but if we consider that "El" is a Hebrew reference to the God of Israel (Israel, Elijah, Daniel...) we can assume that Enel is the correct nomenclature, while we wait for an official one.

Practically all of Enel's attacks are inspired by lighting Gods of the different cultures or by religious terms.

"Mantra", an Hindu or Buddhist short oration with the intention of invoke "latent energies".
"Sanga", a lighting God of the Yoruba tribes in Africa.
"Ishkur", a mesopotamic God of lighting.
"El Thor", Thor was Odin's son, a war and lighting God of the Nordic mythology.
"Hino", the Iroquois God of lighting, natives of North America. He was represented by a giant bird that sent fire arrows.
"Kiten", a Japanese lighting beast.
"Jambure", one of the lighting brothers of Arnhem Land (North of Australia), Rock Art.
"Mamaragan", lighting God of central Australia. "Amal", A pun with "Amoru/Amakudaru" (descent from paradise).
"Kali", the lighting God of some small Malayan tribes.
"Raigoh", formed with the "future" and "Welcome" kanjis. According to the Buddhist beliefs, the reach of the Nirvana.

One we have already saw the attacks, it's the time for the name of characters and locations. The Priests of Enel are inspired by different spiritual states, Gedatsu is the liberation of the soul, Shura is the state of the existence (Ashura), Satori the knowledge and Aum the mother of all mantras. In the Shandia side we also have names of this type, as Braham for Hinduism (Brahman). And about the locations, we have places like the God Shrine, Upper Yard (paradise), the Heavens Gates or the Mayan Forest (being Mayan an Hinduism term for illusions).

The Maxim Arc and the Fairy Verse, or in other words the Promised Land that would reach those that has been chosen. The Arc would be a Biblical reference to the Noah's Arc, the deluge that would end with the world in this case is Enel's intention of destroying everything before he departs.